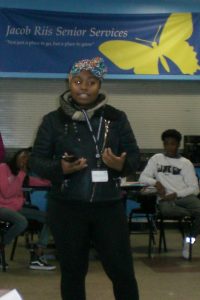 On Monday December 11th, about 150 of us – including about 40 young people from LaGuardia College, Queensbridge and Ravenswood Houses and the Jacob Riis Center – gathered in the basement of Jacob Riis to hear from our young people about their concerns and visions regarding our neighborhood and community. With this in mind, the evening began with an open mic and speak out, during which young people took the floor to tell us what’s on their mind.

Their concerns were wide-ranging, covering police shootings, affordable housing and gentrificationand eviction and displacement, higher education and student debt, and changes in immigration policy and deportations, while the last speaker spoke about her experience as a member of the working class, and her desire to see a world where everyone is entitled to decent pay and a decent life.

Their visions, in sum, were for a community where people stand together and fight the impending change by realizing that we’re all in this together. And what would we be fighting for? A world organized around community and people not profit. 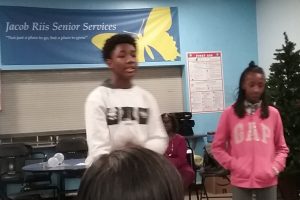 This portion of the evening was followed by an educational segment on changes in LIC in the last 3-5 decades by Steering Committee member Kristen Hackett (see below) and a testimony by Kymberly Hutchinson about what she’s concerned about in the neighborhood and why she’s working the Justice For All Coalition. After that, we opened

A special thanks to co-Chair Yvette Kemp for dreaming up this event and making it a reality! 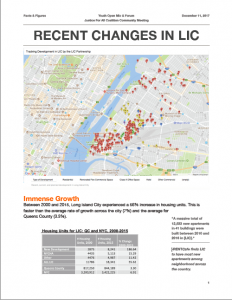 Prepared for our December 2017 Youth Forum, this report details:

All in-person meetings have been canceled. Updates, information and resources coming soon.

JFA’s actions and leadership has been covered in many local Queens and NYC papers. Learn more about JFA and what we’ve been up to here.