A Tech Hub for “NW Ravenswood” ?

At Queens Community Board 1 Zoning Committee meeting in April, a representative of the Department of City Planning (DCP) announced their preliminary plans to apply “a coordination strategy” in rezoning the area they are calling “NW Ravenswood”.

This is the area across the street – to the west – of Ravenswood Houses.The area extends East to West from 12th St to Vernon Blvd, and North to South from Broadway to 37th Ave. 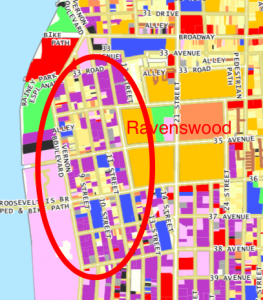 DCP sees this area as “perfect for a light industry and residential hub”, meaning tech start-ups and mixed income housing which would include “affordable” housing.

They recognize the lower median income of the area ($28,800) and are HOPING to encourage developers to include units for households earning $36,000.

Additionally, this area falls in an OPPORTUNITY ZONE, which is a component of Trump’s tax cuts that offers tax incentives to already-wealthy investors and developers. At least one study suggests opportunity zones will worsen gentrification, calling the outcome: “gentrification on steroids” (Kinder Institute for Urban Research, 2019).

Taken together, this leaves us asking:

WHOSE NEEDS WILL BE MET BY THESE PLANS?

JFAC will be meeting with DCP later this summer to discuss these plans, and share our community’s needs and visions for this area. Contact us if you want to be involved.

We have also put together a printable one-pager that can be shared and distributed.

We’re Hiring! Join our Team as a Part-Time Community Organizer!

The Justice For All Coalition, a grassroots group in western Queens, is hiring a part-time community organizer! Applications are due by July 31st, with priority given to applicants who apply by July 15th. Send questions Read more…

NYCHA has been moving at breakneck speed to privatize public housing. First with infill, then with RAD and PACT, and now with the Blueprint. This latest plan was announced in July, and already, hearings are Read more…

Join us for a Press Conference and Rally – Public Money for Repairs and Reparations NOW!