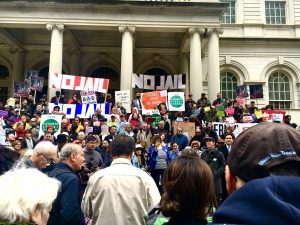 On Saturday October 13th, members of Justice For All Coalition gathered with ~300 members of other community groups from across the city to tell the Mayor and his administration that Enough is Enough! We need affordable, livable, equitable and sustainable communities now!

Our Co-Chair Yvette Kemp was invited to speak – listen (or read) her speech below!

A big thank you to Yvette for representing!

Good afternoon, my name is Yvette Kemp, co-chairperson of Justice For All Coalition, fighting for better housing and jobs in LIC and Astoria.

We are at a crossroads in this day of who can afford to live in this city and who cannot.  As we look around us, we are surrounded by un-affordability, overcrowding, lack of sustainable jobs, decent wages, and homelessness; NYCHA residents are faced with continued rent increases, dire conditions of repairs long overdue and curtailment of security; small businesses are being harassed and shut down due to landlords jacking up rents and/or selling properties from under them; we have schools that are inadequately supplied and funded, with teachers spending their own money for materials, where as their wages should be spent on themselves and families; transportation is now based on a strategical plan to get to work on time, mostly being unsuccessful, due to a broken system, with blame being bounced between the mayor and governor; there are “luxury towers” being built all over NYC for the “next generation”, with no consideration for those who have been living in their neighborhoods for years; and immigration reform has now become immigration deform; these issues puts a strain on our communities, resulting in medical and mental disorders, with a lack of those resources not being affordable as well.

All of this, demands a moratorium on new development in our communities across New York City, so we can become involved, have our voices heard and our plans implemented along with officials, investors and developers.

It is time for communities to live with dignity, integrity, financial stability and a sense of pride.

And now that Judge Kavanaugh is confirmed to the Supreme Court, we and other organizations across this city, MUST come together and mobilize our communities to get out and VOTE!

We must outreach to every NYCHA resident, citywide, to register to vote, if they haven’t done so as yet.

This is a slap in the face, and an utter insult to every woman, man, girl and boy who have been sexually harassed, bullied and assaulted.

Instead of Senators upholding the law of the land, they are embracing and performing criminal and sexual deviance.

THIS IS NOT ACCEPTABLE!!!

It is time for us to stand up, speak up and show out against the tyranny and disrespect of this White House, and NY state and local officials, who do not uphold the oath to serve their constituents; instead, they use us for their own political and financial gain.

If they cannot represent us without civil discord and display empathy for our fellow citizens, then we must continue to organize, continue to educate, and VOTE THEM OUT!!! 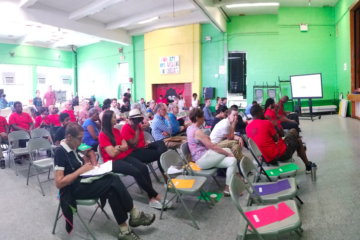 This past weekend, we held our Take Back LIC Series Workshop – a series that aimed to bring together neighbors from across the Greater LIC Area to learn about and discuss the mounting development pressures facing Read more… 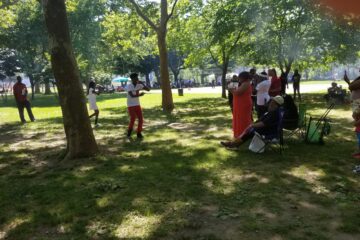 Last Saturday, JFA held a picnic in Queensbridge Park. There was plenty of food, music & good company..   ..and performances by our youth! We also asked community members to complete two statements:  My favorite Read more…