On November 25th, JFAC hosted a press conference with other groups including Woodside on the Move, Stop Sunnyside Yards, Queens Anti-gentrification Project and Sunnyside Artists to released a statement and speakout against development over Sunnyside Yards.

Christine Chung of The City reported a recap here.

Organizing for the event included reaching out to members of the project’s steering committee – who included electeds and community members considered to be local leaders. 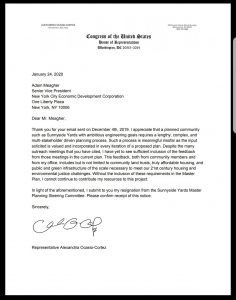 On January 24th, AOC submitted her official resignation from the committee.

There is meeting coming up on January 28th, at PS 1 from 6-8pm. Join us there as we continue to shut this project down, and use it an example of harmful planning practice. Morever, Sunnyside Yards is a jumping off point for critiquing the City’s larger planning and development processes, as was espoused in City Limits by JFAC member Kristen Hackett, and promoting alternatives that may bring about just futures for all.

JFAC Member Publishes OpEd on No to Sunnyside Yards

On Tuesday 10/10/19, JFAC member and doctoral candidate and fellow at The Graduate Center, CUNY, Kristen Hackett published an opinion piece in City Limits on why we’re saying Not to Sunnyside Yards! [and calling for…] Read more…