The Justice For All Coalition is a diverse group of members from the LIC, Astoria, Woodside and Sunnyside communities. Whether working or living in LIC, each of us comes to the table with our concerns and ambitions for our community – the same as you. Below you can learn more about some of our Steering Committee members, and understand what brought them to JFA and what role they play in making our Coalition operate. 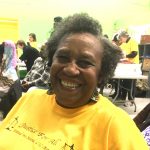 Sylvia is a founding member of J4AC, joining initially to advocate for seniors, Sylvia’s leadership resulted in her taking on the role of Chair in 2017. As a long-time resident of Astoria and a current resident of NYCHA’s Astoria Houses, Sylvia has been deeply impacted by the overdevelopment in LIC/Astoria and NYCHA’s funding deficits. She is a faith leader from the Community Church of Astoria, where J4AC was founded, and it is the faith that she and other founding members of J4AC have that serves as a foundation for our collective work.  She has been widely recognized by elected officials, and other local influential members for her outstanding commitment to the community, evidenced by past and present work, including but also beyond her work with J4AC. To that end, she was recently honored at a Black History Month event organized by City Council Member Jimmy Van Bramer. Yvette has been a member of J4AC since the organization was initially formed. She is a resident of Ravenswood Houses has been personally and deeply affected by the rampant lack of repairs currently happening in NYCHA, as well as the rezoning happening in Western Queens that threatens to displace so many long-standing Astoria residents. She has been the major force behind involving the youth in J4AC activities to ensure that they are involved in the fight for their community and she has spoken at a variety of events throughout New York City, representing the interests of NYCHA Residents.

In reflecting on why she joined J4AC: I had a great childhood growing up in Astoria, but it has changed to the point where I don’t see the same opportunities  for today’s youth. I want to make a difference in uniting with JFAC to stand up and speak out against unaffordable living by rezoning and private developments; fighting for a better quality of life, not only for my son, but for the future of young people in our community. 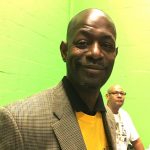 As someone who has grown up in public housing, the issues facing NYCHA residents have always been personal to Stan. He has over 10 years experience as an organizer, and in addition to working on the affordable housing and NYCHA issues, he has also worked on anti-gun violence and anti-bullying campaigns that were focused primarily on reaching the youth. I’m a 28 years old resident of Queensbridge Housing why should I have to worry about if I can live in this same community 20 years from now. I see with my own eyes all the construction that’s taking place in LIC/Astoria and all sister neighborhood. I joined J4ALL because of its faith background . They have a plan and purpose and I want to be able to see that come forward and be apart because I would love to be in this same area that raised me and help me become the woman I am. I grew up in NYC, and hate to see the growing displacement of my fellow New Yorkers. I am also a working artist, and it’s almost impossible for me to afford my workspace in LIC. This is also true for mom & pop stores and manufacturers. I am determined to unite with my friends and neighbors in JFA to fight back against the luxury developments facing our community! Nick is an Astoria small business owner who is concerned about the displacement of local businesses in an overdeveloped neighborhood.  As a JFA coalition member, Nick wants to advocate for low- and middle-income tenant protections, and push for progressive legislation in city council, such as the Small Business and Jobs Survival Act. 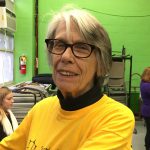 It was a lucky day when I saw the flyer for a meeting of the Justice for All Coalition over a year ago. I moved to Astoria in the early 80’s because I could no longer afford Manhattan; and after a few years of missing Manhattan I came to love this neighborhood.  The hyper-gentrification that I now see is horrifying.  For me the housing issue is truly a meeting of the personal and political – I am personally threatened by the gentrification; as an activist I see the housing crisis as a global one. J4AC is a wonderful group of people whom I am happy to have met and work with. Patricia Dorfman, Steering Committee Member, Sunnyside Resident
I worked to get an older fellow, essential in creating community spirit and helping succeed many mom & pops, back his job when he was let go because of the beginning of non-organic gentrification. All of ours and our children’s future well being, good will, prosperity, sky, and room to live – rely on local loyalty, doing unto others as we would have done unto us, demanding substantial participation in decisions which effect us, and organizations like JFAC, which reflect those goals.  In short, to save my own life, job, home and neighborhood, I’m in. 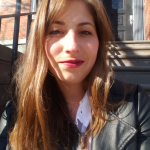 Kristen Hackett, Executive Committee Member, Astoria Resident
Kristen Hackett has been a member of J4AC since August 2017, and joined the executive committee in January 2018. She is currently a resident of Astoria, Queens and has studied housing, homelessness and urban development since she was a college student. Today she continues that investigation as a PhD student in the Environmental Psychology program at The Graduate Center, CUNY. In addition to viewing housing and land use decisions as foundational for perpetuating and upending structural inequality, Kristen’s intimate experiences with housing insecurity also sustain her commitments to the housing and just development movement and to her work with J4AC. 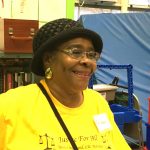 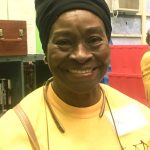 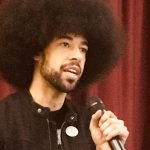 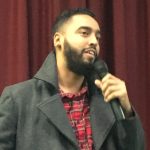