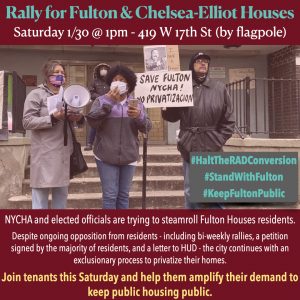 Tenants are Being Silenced

CHELSEA, NY, JANUARY 30, 2021: Since February of 2019, residents at Fulton Houses have shown their opposition to the RAD conversion being proposed by NYCHA and the City. They have held regular rallies and press conferences, collected signatures from over 70% of their neighbors on a petition opposing the conversion, voiced their concerns to the 50-person working group responsible for deciding the future of Fulton and Chelsea-Elliot Houses and fates of more than 2000 households, and written a formal letter to HUD documenting tenant opposition to the project and the ways they’re being excluded from the process.

But their concerns remain largely unheard; overshadowed by the complicity of elected officials at every level of government who sit on the working group, and overshadowed by the TA President who claims to speak for the majority and claims that the repairs are so immediate, it must be rushed through.

Yet, at the hearing on RAD/PACT held by the Committee on Public Housing two weeks ago, a resident sitting on the working group unexpectedly voiced her opposition to moving forward and to the working-group process, and admitting that she felt coerced – like the working group was not ever truly open to hearing alternative view points that would keep their homes public.

This tenant found herself in the majority at the hearing – most tenants on the call spoke against forward motion with RAD/PACT at all – given the new administration, as well as the ongoing and raging pandemic which was twice as fatal for public housing residents. Even Community Service Society, by way of Victor Bach, changed its tune by calling for a pause because of the pandemic (https://www.cssny.org/news/entry/testimony-nycha-2.0-and-pact-rad)

Today residents are gathering once again to say no to this plan. They are risking their lives to oppose this plan that they feel will have grave consequences for their futures. And their fears are not unwarranted; eviction has been a consistent byproduct of RAD nationally and here in NYC.

For Immediate Release With inquiries, contact jfacoalition@gmail.com CHELSEA, NY, FEBRUARY 8, 2021: This week, we the residents of Fulton Houses, continue to publicly oppose plans to privatize our homes through the RAD/PACT program with a Read more…