CHELSEA, NY, FEBRUARY 8, 2021: This week, we the residents of Fulton Houses, continue to publicly oppose plans to privatize our homes through the RAD/PACT program with a week of action. Flyer below.

This week comes around the same time that recommendations are expected to be put forth by the Chelsea Working Group, an exclusive group of NYCHA representatives, housing practitioners, and a handful of residents who were convened by the elected officials presiding over our homes in response to our heavy opposition early on. Though few working group members live in Fulton Houses or the other affected developments, its recommendations could determine the future of our homes and more than 1000 of our neighbors, which will have direct consequences for our futures and our right to housing.

This week’s actions also mark the two year anniversary since our organized opposition began. Since February of 2019, we the residents of Fulton Houses have protested the attempt by NYCHA to privatize and financialize our homes. Instead, we have repeatedly demanded that our homes remain public. To this end, we have:

We are also now exploring potential legal avenues if a determination is made.

We hope it doesn’t come to that, so this week we’re hosting a week of action, For the Love of Fulton. We’re inviting residents from around the city to join their neighbors in calling for elected officials sitting on the Working Group to step down and publicly oppose the RAD conversion.

This would not be out of context because over the last two months many elected officials have voiced their concerns about and opposition to RAD at multiple hearings including a hearing on RAD/PACT organized by the Committee on Public Housing on January 13th.

Committee member, Councilmember, and Mayoral hopeful Carlos Menchaca spoke after the first set of panels composed of tenant speakers, commenting that he had heard enough to know that tenants at Chelsea and otherwise don’t want RAD/PACT and that tenants have been mostly unanimous that the pandemic is not the right time to discuss such drastic changes.

Committee Chairperson and Council member Alicka Ampry-Samuel and Committee member and Councilmember Inez Barron grilled NYCHA executives on the matter of centering residents in plans for the future of their homes. Barron specifically asked what power tenants have to say no to these deals if that is desired, while Chairperson Ampry-Samuel emphasized that centering residents did not mean ‘engaging’ tenants after a plan has been hatched but centering them and their needs from the beginning.

Even Victor Bach of Community Service Society, a proponent of the working group model and a member of the group, called for a pause: “It might make sense for NYCHA to press the “pause button” on further conversions and forward movement on the Blueprint for the time being, at least until the pandemic subsides and residents can muster the time and information they need to participate fully in the decision process.”

We will therefore be mobilizing ourselves, friends, and neighbors this week to make calls and spread the word about what is happening to our homes. This week of action will culminate on Sunday, February 14th–Valentine’s Day–when we will gather together at 1 pm for a rally in support of keeping public housing public and opposing the PACT/RAD plan that would alter our housing rights and bring Fulton Houses under private management. We demand that public housing remain completely public, and further, that any decisions about the future of our housing includes us front and center. 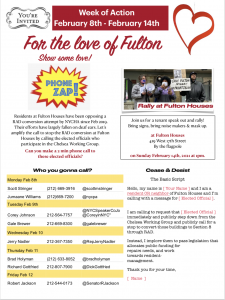 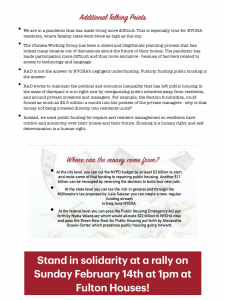 Gas is turned back on at Woodside Houses!

We are happy to report that on Monday, February 1st the gas was turned back on at Woodside Houses! Tenant leader Thomasina Reyes shared this video with Monica Morales of herself and her son getting Read more…